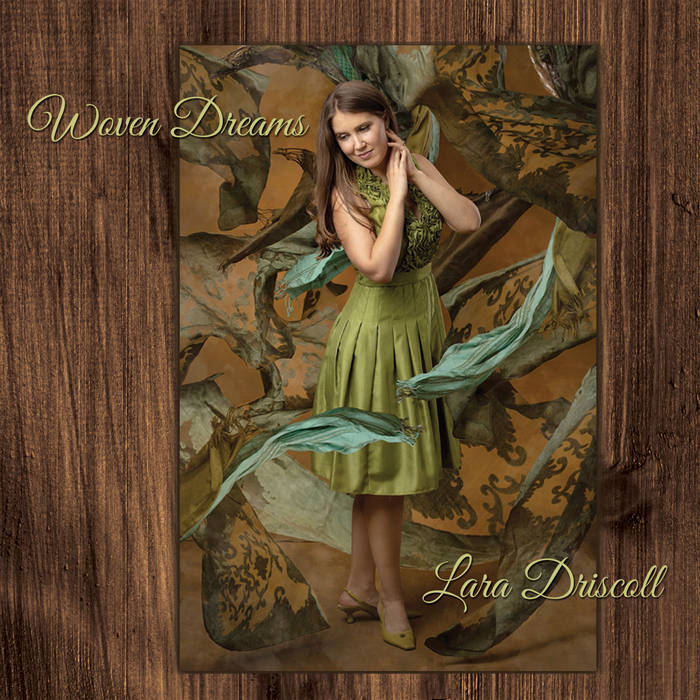 For Chicago-based Lara Driscoll, Woven Dreams is both a beginning and an end. It’s her first album as a leader, and as such will serve to introduce jazz listeners to her warm, expressive playing and quietly ingenious compositions. At the same time, Woven Dreams memorializes the trio that she led while a graduate student at Montréal’s McGill University, as well as her time in the Francophone city.

“With Woven Dreams, I’m trying to represent several years,” Lara says. “We played together regularly. We (the ensemble) played some of this music at my master’s recital. I wanted to capture all of that before I moved on to something else. And I’m so glad I did, because now bassist Paul Rushka is in Vancouver, drummer Dave Laing is still in Montréal, and I’m in Chicago.” Even Paul Johnston, the album’s recording engineer (5x JUNO winner for Christine Jensen, Joel Miller, Carol Welsman, projects for Justin Time, Origin, Inner Circle, Whirlwind, Cellar Live), moved to Edmonton shortly after this session. “He was kind enough to do this right before leaving,” Driscoll says.

Driscoll, who earned a bachelor’s degree in jazz performance at the University of Illinois Urbana-Champaign, hadn’t originally planned on attending McGill, much less on getting a masters in jazz performance. “At the time, I was debating whether or not to do another jazz degree, she recalls. “I was considering music therapy, and was intrigued by the Concordia program. But then I met Jan Jarczyk.”

The Polish-born Jarczyk taught piano and composition at McGill, and was a much-beloved figure on the Montréal jazz scene. Driscoll had been referred to him to learn about McGill’s program, but after chatting a bit he asked her to play. “I wasn’t really prepared to do an audition right that second,” she says. “So I said, Well how about we play a duet? I started to play ‘Alone Together’ and he joined in.” Afterward, Jarczyk suggested that Driscoll apply to the program, and before she knew it, “they gave me some courses to teach and a scholarship.”

“I kind of fell into living in Montréal, which was honestly an amazing thing,” she says. “To get to go to grad school, gratis, in a beautiful bi-lingual city, and also to get to experience the way that Montréalers think about music, which is a very interesting combination of European and North American sensibilities.”

The child of an American father and French mother, she felt right at home with the bilingualism. Prior to having children, Driscoll’s parents met in Nairobi, Kenya in the 1970s and traveled the world together. Their life story helped foster Driscoll’s appreciation for other cultures and a yearning to continually widen her perspective. Montréal’s creative scene seemed a logical locale to enrich her musical career. “In Montreal, musicians always talked about their projects,” she says. “They would say, I have this project, and I’m working on this project… That mindset inspired me.

Driscoll’s most intense compositional project became her trio. “I ended up with a pretty specific vision in some ways,” she says. “Like the bass lines, and certain things that I want in the arrangements. I think a lot about colors and shapes and mood and dynamics.”

Of her album-opening treatment of the standard “Autumn in New York,” Driscoll explains, “Whenever I’m arranging a standard, my approach is to start with the melody, and ask myself, how can I harmonize this melody in an interesting way? I was exploring what it was like to harmonize melody with crunchy block chords. I thought it’d be fun to have the bass player double the melody when the words are ‘Autumn in New York,’ so the melody was in my right pinky, and then also in my left thumb with the bass. And for the rest of the phrase, I used various reharmonizations, and opened it up with some suspended chords, to change the color and make it a little freer, as opposed to keeping it locked into diatonic harmony. “Also, the head changes meter from the original 4/4, and then the solos are in three. I let the lyrics determine the meter.”

Perhaps the most ambitious writing on the album, though, is the suite “Forgiving – Black Dog Skirts Away.” Inspired by Fred Hersch’s “Black Dog Pays a Visit,” the three tracks were prompted by Hersch’s having written that the Black Dog of his title was depression. “I really love this composition; what can I do creatively with it?” she says. “It’s all minor chords, and there’s a really sequential melody that is simple and beautiful.”

“I tried to emulate that technique, but react to it by using major chords instead. There’s this three-note theme that I play at the beginning of the track very high up, and it comes back, over and over. I see that as the Black Dog. And at the very end, it comes back suddenly. It still might be part of us. How do we forgive ourselves of it? How do we forgive those who have it?

Woven Dreams, a beautiful ballad, was Lara’s first ever jazz composition. "I was learning the standard ‘You've Changed' at the same time and I think that shows in some of the melodic and harmonic choices." Her emphasis on melodic contour here is obvious, and her imaginative chord work and earthy sense of phrasing draw the listener in. "This tune (and the title of the album) was inspired by one of my dearest mentors, Chip Stephens, and his quote, ‘sing the melody in your mind's ear and be a weaver of dreams.’” It’s clear from this melange of diverse influences and substantially original playing that Lara Driscoll’s voice is markedly personal and should be widely heard.

Lara Driscoll is a French-American pianist, composer, and educator from Chicago, known for her “captivating style and uncluttered finesse” (COCO Jazz CKVL FM Montreal) and her “magical touch...musical solos” (All About Jazz).

Bandcamp Daily  your guide to the world of Bandcamp

Guests include Kassa Overall and Muriel Grossman, plus an LP of the week by Van Hunt.